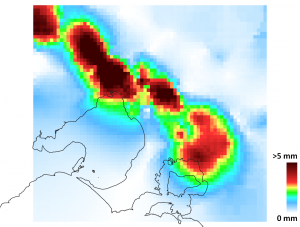 HARC generated a rainfall datacube for Melbourne Water which can be used as an input into Infoworks modelling of the Melbourne drainage network. The data cube provides grids of rainfall at 2 km x 2 km resolution across the greater Melbourne area, with a temporal resolution of 30 minutes, for a 58 year period (1950-2017). The rainfall data cube was prepared by combining two sets of historical data, comprised of AWAP gridded daily rainfall and data from more than 200 pluviographs.

HARC also developed and calibrated rainfall runoff models, to generate hourly inflow time series for 19 catchments that were on the rural fringe of Melbourne’s sewer network. To support decision making under a changing climate, HARC and the University of Melbourne extended the historic rainfall datacube to account for four scenarios, representing projected changes in climate over the 2030 to 2070 period. This involved characterising the competing impacts of increased rainfall intensities for the more intense storm events, consistent with a warming atmosphere, whilst representing the reduction in the frequency and rainfall depths that occur on a more common basis, to be consistent with the projected reduction in mean annual rainfall under climate change for Melbourne.

HARC developed an innovative approach to the processing, storage and management of large GIS datasets; as each of the 1,020 grid cells had ~87,000 timesteps of rainfall that needed to be derived, from the base data and then adjusted for climate change.

Back to Project Map